The Viking Bands of North Meck 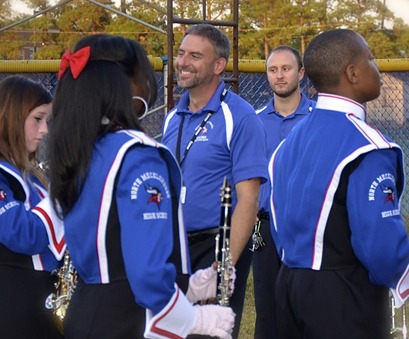 Home of the Boogaloo!

Mr. Herriman is originally from Long Island, New York.  He attended Ithaca College and earned his Bachelor of Music in Education.  Upon graduation Mr. Herriman was an Elementary Band Director for 11 years in the Seaford Public School District.  He attended Hofstra University and earned a Master of Arts in Education with an emphasis on Wind Conducting.  While at Hofstra, he worked under the mentorship of Dr. Peter Boonshaft.  While studying for his Master’s Degree, Mr Herriman was a Principal Oboist with the Hofstra University Wind Ensemble and Symphonic Band.
He and his family moved to Charlotte in 2005 at which time Mr. Herriman stepped out of education briefly.  In 2012 he accepted a job at North Mecklenburg High School where he is currently the Band Director.  Mr. Herriman lives in Charlotte with his wife Jennifer, his two children, Grant and Zaria, one dog (Jake) and three cats (Sterling, Oreo and Shadow).  In his free time he enjoys playing hockey, gardening, cooking and relaxing on the back patio.